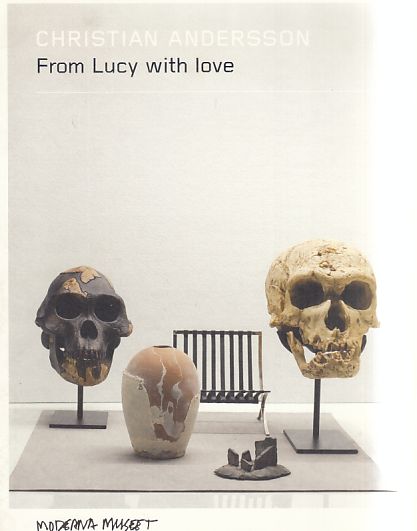 Sehr gutes Ex. - Text: Magnus Jensner. - Englisch; schwedisch. - In his works, the artist Christian Andersson speculates about possible events, undiscovered opportunities or hidden discoveries, often based on historical or less known material, where his own additions or shifts in interpretation aim to emphasise the already known or allude to the existence of something that has been overlooked. Many of his works are based on legendary objects or references that are on the verge of being forgotten, such as a battery, a book, a conspiracy theory, or a frame from a well-known comic strip. These objects or references may not have an obvious place in sanctioned history, but in the artist's interpretation they contribute to testing an alternative perspective. The title of the exhibition - From Lucy with love -refers to one of his new works. This work also serves partly as a key to many of the other works, but also more generally as a key to his entire oeuvre. In the artist's references to the historical material, he adds elements or inserts them in a new context in order to try a different interpretation. Occasionally to ridicule our kneejerk perception of something, so as to disturb our circles. The current exhibition at Moderna Museet Malmo deals with issues such as double exposure, symmetry, copy, original, copying and mythologising of both historical and popular cultural phenomena. It includes works demonstrating the artist's interest in the history of modernism, for example his fascination for the architect Ludwig Mies van der Rohe and his well-known and legendary Barcelona Pavilion. An abstracted replica of the pavilion will be built in the exhibition. "The original pavilion, which was demolished in 1930, exists only in black-and-white photos. Later, an exact copy was built in the 1980s. This gives a phantom-like aspect to the original building, as though it were a ghost from the past. The very fact that it was demolished rather shortly after the exhibition encourages the formation of myths. What also fascinates me is that almost all the black and white photos of the original pavilion are devoid of people, making it timeless, it seems to exist through all times ? / Magnus Jensner. ISBN 9789186243173