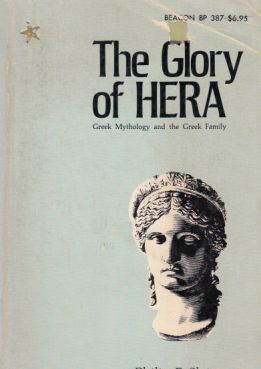 Slater, Philip E, The Glory of Hera. Greek Mythology and the Greek Family.

Gutes Ex.; Einband berieben; Ex. mit leichten Gebrauchsspuren. // Englisch. // Few objective portraits, and little objective data, exist to describe Athenian society during the fifth and fourth centuries, the so-called Golden Age in Greece. Contrary to conventional accounts of the period, which are rather appealing, Philip Slater argues that the Greeks were "quarrelsome as friends, treacherous as neighbors, brutal as masters, faithless as servants, shallow as lovers - all of which was in part redeemed by their intelligence and creativity." The mother-son relationship is the focus of this major study of Greek family and Greek mythology. Greek women married early, were excluded from public life, and had little legal protection; yet females figure prominently in Greek mythology and the maternal goddesses are often represented as powerful and aggressive. It is Slater's contention that women in Greek society exerted a strong matriarchal dominance, which simultaneously encouraged and stymied the exploits of the fabled Greek hero. Slater pursues the themes of narcissism and psychological ambivalence as he studies the myths of Zeus, Apollo, Orestes, and Dionysus; and particularly Heracles (literally, "the glory of Hera"), whose several responses to his persecutor}' mother, Hera, exemplify every mode of response to maternal threat. In a concluding section, Slater suggests cross-cultural and contemporary parallels to the Greek situation, notably in the life of the American middle class today. (Verlagstext) // INHALT : Preface --- PART ONE : ORIGINS AND CONSEQUENCES --- The Greek Mother-Son Relationship: Origins and Consequences --- Symbols, the Serpent, and the Oral-Narcissistic Dilemma --- PART TWO : MYTHICAL DEFENSES AGAINST THE MATERNAL THREAT --- Sexual Dominance: Zeus --- Masculine Antisepsis: Apollo --- Matricide: Orestes --- Self-Emasculation: Hephaestus --- Identification with the Aggressor: Dionysus I, --- The Ritual --- Identification with the Aggressor: Dionysus II, --- The Attack in the Womb --- Identification with the Aggressor: Dionysus III, --- The Attack on the Neonate --- Identification with the Aggressor: Dionysus IV, --- The Attack on the Mature God --- Maternal De-Sexualization: Perseus --- The Multiple Defenses of Heracles // (u.a.) ISBN 0807057959