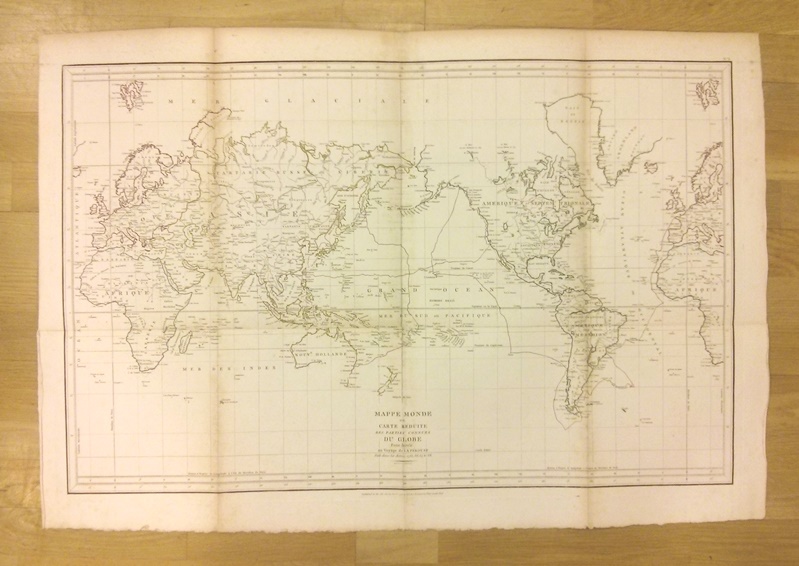 Im Jahr der ersten englischen Ausgabe (erstmals auf Französisch in Paris 1797 erschienen). - Sabin 38961. Cox I, 67. Howes L 93. Forbes I, 309. - "La Pérouse`s expedition was one of the most important scientific explorations ever undertaken to the Pacific and the west coast of North America" (Hill Collection 972 zur EA). - "In 1783 the French government resolved to send an expedition to the Pacific to complete Captain James Cook`s unfinished work, and in particular to explore the passages in the Bering Sea, which had been a mystery to Europeans since the sixteenth century. King Louis XVI himself took a hand in drafting the plan and itinerary, a copy of which is in the Municipal Library at Rouen, France, and when La Pérouse was selected to lead the fleet gave him an audience before he sailed. In command of two ships, La Boussole and L`Astrolabe (Commandant de Langle), he left Brest on 1 August 1785 making for Brazil. Doubling Cape Horn he refitted in Chile, then sailed to the Sandwich Islands and thence to Alaska, where he turned south exploring and surveying the coast as far as California. After a short refit at Monterey, he sailed across the Pacific, discovered uncharted islands, and visited Macao and Manila. After six weeks reprovisioning and refreshing he left on 10 April 1787 to survey the coasts and territories north of Korea, which had been described and commented on by Christian missionaries. He sailed up the Gulf of Tartary, naming several points on both its shores and learned that Sakhalin was an island. In September he put in to Kamchatka to replenish his supplies. From there he dispatched an officer, Lesseps, overland to Paris with accounts of his discoveries, while he turned south making for New Holland. In December, at Tutuila, Samoa, which Bougainville had called the Navigator Islands when he explored them in 1768, natives suddenly attacked a party from L`Astrolabe seeking water and killed de Langle and eleven others. La Pérouse left without taking reprisals and sailed through the Pacific Islands to Norfolk Island and to Botany Bay. He was sighted off the coast there on 24 January 1788 but bad weather prevented his entering the bay for two days. By then Governor Arthur Phillip had sailed to Port Jackson, but John Hunter had remained with the Sirius and the transports, and assisted La Pérouse to anchor. He established a camp on the northern shore, now called after him, and maintained good relations with the English during his six-week stay. He sailed on 10 March and was not heard of again. His disappearance led the French government in 1791 to equip another expedition under Bruny d`Entrecasteaux to look for him, but the search was fruitless" (Australian Dictionary of Biography). - Die Text-Bde. leicht gebräunt und nur wenig fleckig. Der Atlas gebräunt und etw. fleckig (vor allem in den Rändern bzw. in Rändern. Die große Karte No. 1 "Mappe Monde ou Carte reduit des parties connues du globe pour servir au voyage de La Perouse" liegt lose bei. Exlibris und Buchinnendeckel mit eingeklebter hs. Nummer.