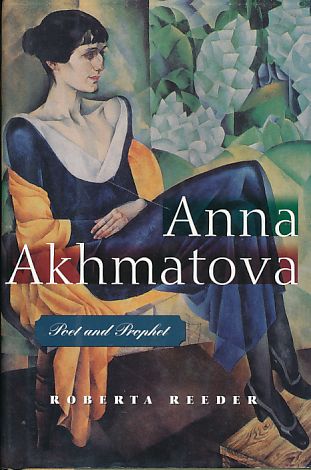 Gebraucht, aber gut erhalten. - Inhalt: COLLECTED WORKS OF ANNA AKHMATOVA -- The Wild Child Becomes a Poet: 1889-1909 -- Petersburg, Poetry, and the Cabaret: 1910-1914 -- The Twilight of Imperial Russia: 1914-1917 -- The Revolutionary Years: 1917-1922 -- The Great Experiment: 1922-1930 -- The Great Terror: 1930-1939 -- The War Years: 1939-1945 -- The Cold War Begins: 1946-1952 -- The Thaw: 1953-1958 -- Pasternak: The Nobel Prize and Death, 1958-1960 -- The Gay Little Sinner Repents: Poem Without a Hero -- Joseph Brodsky: Arrest and Exile, 1963-1965 -- The Last Years: The 1960s. - Anna Akhmatova, a biography in the works for ten years, tells the tragic story of one of our century's greatest poets. Born into an aristocratic family in 1889, in the Ukraine, Anna Akhmatova was raised in St. Petersburg in the twilight of the Romanov dynasty. From childhood, she demonstrated a prodigious gift for both poetry and prophecy, becoming very early on a cult figure among the intelligentsia of the Silver Age, the cultural period between 1890 and 1917 that witnessed the fall of Tsarist Russia. ... Akhmatova possessed a quiet reserve, combined with an unusual intensity, that early on attracted fellow artists. As Picasso changed the face of art, Akhmatova would revolutionize the poetic vision of her contemporaries, for it was she who introduced the laconic: style of twentieth-century poetry that seemed to blend in with the modernist forces of her age. One of those writers on whom she cast her spell was Nicholas Gumilyov, a swashbuckling Hemingway type, an eminent literary figure in his own right, who became her first husband. On their honeymoon, they went to Paris in 1910, where they met Modigliani, with whom Akhmatova later had an affair, succeeded by other extremely close relationships with the likes of the composer Arthur Lourie and Osip Mandelstam. Akhmatova and Gumilyov's relationship was clearly strained from the start, and the two, in a love-hate style, tortured each other until their divorce in 1918. Only after Gumilyov was shot by the Bolsheviks in 1921 did Akhmatova realize how much he had meant to her. Friend and protector of writers like Pasternak and Mandelstam in the 1920s and 1930s, she was so lionized by her intellectual peers that even when the Bolsheviks turned on her poetry, the authorities feared to harm or kill her. ? While Akhmatova was spared the physical torture of others, her son, Lev, was arrested several times, the authorities believing that she could be tortured through her son's imprisonment. As an artist and mother, she reacted to her trauma by composing a cycle of poems about suffering called Requiem, now regarded as one of the greatest works of the twentieth century, but not published fully in the Soviet Union until 1987. Her other truly great work, Poem Without a Hero, was written from 1940 through 1960, partly during the time that she was expelled from the Writer's Union, a time when friends kept her from starving to death. It was then that she became, through the likes of Isaiah Berlin and others, the most striking symbol to the West of the complete and ruinous breakdown of Communism. Under Khrushchev, life improved for Akhmatova. Widely known as a prophet who could bring meaning to her people's lives, she was allowed to publish her poetry and lived to see her son's release. She died, as she would have wished, in her native land of Russia in 1966 with great honor, with the then younger generation, including artists like Joseph Brodsky, looking to her for transcendent inspiration. (Klappentext). ISBN 9780312112417