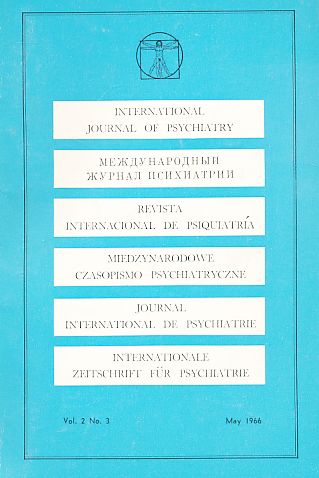 Gutes Ex.; Einband etwas berieben; geringe Gebrauchsspuren. - INHALT : Editor's Notes - Eight Ages of Man Erik Erikson (U S A ) - Eight stages of psychosocial development are distinguished, and the specific nuclear conflicts for each state are indicated The solution of each nuclear conflict is based on the integration of earlier ones - Discussions: - Lois Murphy (U S A ) - Erikson's concepts integrate psychodynamic thinking with awareness of the cultural matrix These concepts will be applied, revised, and developed just as the concepts of defense and autonomous functions of the ego have been absorbed and revised - Maurice Green (U S A ) - The term "crisis" is unfortunate for its connotation of almost life-or-death significance These transitional periods should be regarded more as opportunities and challenges than as crises Psychoanalysis seems to have a certain contempt for the successful, middle-class adolescent who has no serious difficulty - Jules Henry (U S A ) - Underneath the cliches, this is a psychoanalytic manual to provide personnel for an expanding economy, imperious in its job demands, determined in its conformity requirements, and savage in its punishment of those who fail - Edgar Friedenberg (U S A ) - Nobody has written of adolescence with more insight, responsibility, and real respect and tenderness than has Erikson He has never been equaled for compassion and, above all, for immediacy - Hypochondriasis: A Study of Some Historical, Clinical, and Social Aspects F E Kenyon (England) - There is no such entity as primary hypochondriasis; it always occurs as part of some other syndrome, usually a depressive one Social and cultural factors are important in influencing not only what is accepted as illness but also its form, incidence, and treatment - Discussions: - Irving K Zola (U S A ) - There seems to be something meaningful in the concept-if only demonstrated by its continued medical and lay use We also know that, when operationalized by some form of measurement, significant statistical differences are obtained between a large number of subpopulations, be they social, psychological, or diagnostic - Murray Wilson (Canada) - The concept of "hypochondriasis" should be retired from active duty in psychiatry Somatized psychic distress is too often treated by "pseudo science"! - John D Stoeckle (U S A ) - The implicit clinical phenomena are: (1) bodily complaints, (2) attitudes and beliefs about the body, (3) concerns about illness, and (4) the act of complaining to the doctor - Stewart Wolf (U S A ) - More than one hundred years of study have failed even to provide a generally serviceable definition of hypochondriasis Much of the confusion in psychiatric literature has been created by each man using a common term for his own purposes - Henri Ey (France) - Hypochondriasis is a pathological form of human existence All men of all times and all countries are preoccupied with their health, in the same measure as existence is a problem, lived in anxiety, and that anxieties attached to the body become "embodied" in the human condition - The History of Psychiatry: A Cultural and Bibliographical Survey - George Mora (U S A ) - More work is needed in critical understanding of the classic psychiatric texts, presentation of psychiatric concepts in their cultural background, and the investigation of particular cultural topics and their psychological implications - Discussions: - Edwin G Boring (U S A ) - Psychiatry could well accept the description of its portion of the psychosocial matrix as a proper goal for its historical endeavor Its selection will not, however, remain strictly bound, for knowledge is continuous and the consideration of inter-disciplinary contexts are necessary for adequate description - Oskar Diethelm (U S A ) - There is need for more knowledge of past, as well as of present, psychiatric disorders and their treatment in the hospital and in the community, in different countries and cultures - Nina Ridenour (U S A ) - "New" patterns may seem new if one is unaware of what went before Study of history might moderate the excesses of logical positivism, and the sacrifice of significance to methodology - Epidemiology of Mental Retardation Ernest M Gruenberg (U S A ) (continued from Vol 2, No 1) - Discussions: - Brian MacMahon (U S A ) and Ian Leek (England) - Gruenberg indicates that there is insufficient evidence for rejecting the "cohort" hypothesis explaining the increase in risk of mongolism with increasing maternal age Additional information is here presented that allows a fairly clear refutation - Ernest Gruenberg (U S A ) and Ari Kiev (U S A ) - Mental retardation does not confer a fixed destiny on all individuals Studies are needed to estimate the frequency of benign, self-limiting, and neglected mental retardation.